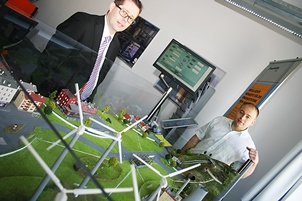 Dr. Przemyslaw Komarnicki showcases his model landscape to the guests of the Magdeburg-based Fraunhofer Institute for Factory Operation and Automation IFF with pleasure. All components of the energy system that are currently relevant (generators, loads and storage units) are concentrated here close together. Komarnicki observes patience and will later on give the opportunity to have a better overview of the „energy supply system of tomorrow“.

The energizing plexus will light up brightly and show its ways up to the sockets. Just like a heart would do, the transformer substation will supply the wires with energy from a power plant, from a wind farm and a solar park and from a biogas plant as well. „All sockets are well supplied as long as power runs in the wires at an equally spaced frequency.“

The scientist compares it with the ramified system of human blood vessels. Whether blood or power – there would always be times when it would flow through the network, either to a greater or lesser extent. „Should problems arise in the human arterial network, so would the medical body check, by means of modern possibilities, how things look like in the grid operation. Concerning the power grid, those possibilities are not yet to be found everywhere“, says Komarnicki who also adds that a good monitoring, i.e. the accurate control of the grid, is a prerequisite for a healthy and stable network which is likely to make the energy transition be successful.

Przemyslaw Komarnicki, specialist for power engineering from Poland, did his Ph.D. at the Otto von Guericke University Magdeburg and feels nowadays at home at the Fraunhofer IFF in Madgeburg in the realm of Process and Plant Technology. He leads the research project SECVER that has also been existing there since December 2013. The abbreviation SECVER stands for „Security and Reliabity of distribution networks on the way to an energy supply system of tomorrow“.

„In the past, it was easier“, says Przemyslaw Komarnicki and draws the attention on the model landscape. In simple terms: sockets were found at the bottom level and power plants were at the top one (within the transmission network from 220kv upwards). Electricity flew from top to bottom. Nowadays, the large field in between (from 110kv upwards) is tilled with various sources of green electricity. Komarnicki points at the photovoltaic facility, the biogas plant and the wind farm. Those green energy sources can however be only partially controlled. Wind turbines rotate and sunshine appears when there is in fact no need of too much electricity. The fluctuating in-feed of power supply can logically lead to fluctuations in the distribution network.

How much fluctuation can the power grid endure? „It depends on the current state of the grid“, says Przemyslaw Komarnicki. He adds that an accurate diagnosis is an essential precondition to successfully bringing about its stability at the right place.

Various scenarios can be simulated at the model landscape of the Frauenhofer IFF institute: although it is difficult to forecast wind and sun, wind and photovoltaic power plants can contribute considerably to making a stable system. „Provided, of course, the network undergoes thorough observation and it we can make a point as to the time and the degree of regulation“, says Komarnicki.

A measuring principle with which suchlike observations could be undertaken comes from the USA. The Magdeburg-based Fraunhofer IFF, Dr. Przemyslaw Komarnicki in persona, was involved in the development of appropriate measuring devices. The phasor measurement units (PMU) are integrated into the distribution network at certain nodes and send their measurements – these can be chronologically resolved through GPS – in an interval of 40 milliseconds. Where then?

Dr. André Naumann can theoretically answer this question yet. The scientist wrote his doctoral thesis at the Otto von Guericke University Magdeburg on „Data transfer“ and has been working at the IFF since 2012. In the framework of the SECVER research project, he is in charge of developing a software for the data management system that can receive, filter and collect such a huge data volume. Partners in this assignment are the Siemens AG company and the University of Magdeburg.

With the Fraunhofer Institute for Wind Energy and Energy System Technology IWES in Kassel, the wind farm operator RegenerativKraftwerke Harz and the network operator Avacon AG, the SECVER research project is now undergoing a “field experiment“, to put it literally. It takes place in the Harz Region where the Alliance of researchers can build on the results of the previous project „Harz renewable energy model region“. Decentralized producers of renewable energy and regionally controllable consumers had come together in a kind of virtual power plant.

In the Harz, the SECVER project aims at developing the prototype of a monitoring system with time synchronization and high-precision properties. „Up to 30 measuring devices are to be gradually installed in the distribution network of the region“, says the project manager Komarnicki.

According to Komarnicki, in two years, when the research project comes to its end, they would like to have gone so far that the network operator will be able to provide in real time thanks to up-to-date measuring technology, meaningful information as to whether his power distribution network is in a stable state or not. „Should this not be the case, the monitoring system would inform via a signal about the location where a problem may have occurred.“ Another vision of the researchers: should they also succeed in making wind and photovoltaic power plants regulate their output automatically, then they would be able to make sure that the mains voltage remains “within the bounds”.

Caption: Dr. Przemyslaw Komarnicki (left) and Dr. André Naumann simulating various scenarios at their model. For instance, they can show what could happen in case of fluctuations in the power grid – up to complete blackout.