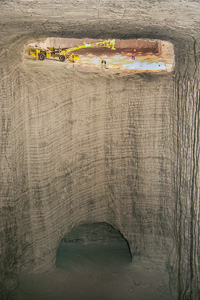 Zielitz potash has evolved into an export hit. Around 95 % of production is exported. Countries in South America, such as Brazil, and in Southeast Asia rely on fertiliser from Saxony-Anhalt. The products from the Zielitz potash works are mainly transported to the international port of Hamburg to the K+S Transport GmbH company there, where they will then undergo a journey into the big, wide world. ‘Almost 80 % of our products help farmers worldwide to use the balanced fertilisation required to increase their yields in order to create more food for a constantly increasing world population’, states Mirko Rüger, Commercial Manager of the Zielitz K+S KALI GmbH works.

The company is the largest single location of the K+S KALI GmbH. The proportion of the total production of the Zielitz potash works is around 30 %. The miners extract the material from a depth of 400 to 1,300 metres to the surface. The potash deposits have an average height of six metres. The current underground mining area comprises an area of 21 x 10 kilometres. The crude salt is brought to the shaft on conveyor belts and then transported to the surface. The total length of these conveyor belts is 80 kilometres. A total of 550 mobile devices are used for the underground extraction of the crude salt. The annual output is some twelve million tonnes. The proportion of the reusable material in the crude potassium salt extracted, known as potassium chloride, is about 20 %. The production in the northern part of Saxony-Anhalt has been running since 1973, and 20 years later the Zielitz Potash Works became part of the K+S Group as a result of the German-German potash merger (end of 1993).

Up to the present day over € 550 m has flowed into the maintenance and targeted expansion of operations. Large-scale investments in new plants have enabled a continuous increase in the range of products. Alongside fertilisers with a share of around 80 %, ultrapure potash is now produced for industrial use, e.g. for chlorine-alkali electrolysis to produce basic chemical substances. Well over half of the worldwide demand for industrial quality potassium chloride is used as a raw material in this process. The basic chemical substances obtained in this manner are used in the production of glass, ceramics, pharmaceuticals and pest managment products. Furthermore, the use of potassium chloride in the quality of food-grade products is becoming increasingly important. The plant constructed for this purpose cost nearly € 28 m. The company has been undergoing refining operations under the name KaliSel since 2009. Thanks to this, it is possible to reduce the proportion of table salt in food. It is used in isotonic drinks, in instant meals, in bread and baked goods, in sausages and the manufacture of whipped cream. Last year the Zielitz company supplied almost 20,000 tonnes of this speciality product to customers in 50 countries, such as New Zealand, Argentina and Ethiopia.

The cranes on the company premises have long since started to turn and swing again. An imposing steel skeleton is now being constructed, which at the beginning of next year will evolve into a new production facility. This will again result in an increase in the added value at the location with its 1,850 employees. Medium-sized businesses in the region also benefit from the investment. According to its own estimates, some 6,000 jobs are directly and indirectly connected with the Zielitz Potash Works. ‘In the plant, which we are building for approx. € 20 m, we will be manufacturing ultrapure potassium chloride (KCI) at a new level of quality, i.e. in a rougher, more compact form. The key requirement for such major investment in Germany and Saxony-Anhalt are stabile and reliable regulatory framework conditions’, explains Mirko Rüger. The rougher grain will increase the flowability of the product and improve the storage and transshipment possibilities. Because of this, it will be possible to better cover the requirements of customers everywhere in the world. In the new production process, featuring an additional refining step, the external form of the previous fine-grain product will be different. Cherry-sized pieces are the result, which will mainly be sent to the customers by containers. ‘Such innovations are necessary so that we do not stagnate, but rather improve the coverage of our customers’ demand and therefore be able to constantly expand our competitive position in key market segments’, states Mirko Rüger.

In 2012, the Kassel-based K+S Group achieved a turnover of € 3.9 bn (in 2011 it was almost € 4 bn. K+S KALI GmbH extracts and refines potash crude salts in six mines in three potash districts: in the Hanover mining district in Lower Saxony, in the Calvörder mining district in Saxony-Anhalt and in the Werra-Fulda mining district in Hesse and Thuringia. While the potash deposits in the Werra-Fulda district are flat and seam-layered, lying at depths between 500 and 1,000 metres, deformations in the earth’s crust resulted in faults and folds of the deposits at both the northern potash districts of Lower Saxony and Saxony-Anhalt. The formation of the potash deposits in Germany date back more than 250 million years to the Upper Permian epoch, a period when the ‘Zechstein Sea’ covered wide areas of Central Europe. This sea eventually evaporated due to exposure to the powerful solar radiation.