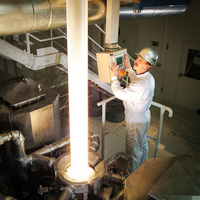 An hour's worth of video material is uploaded onto YouTube every minute. Each day, users all over the world publish 340 million posts on the short messaging service Twitter. Just two examples from an ocean which show that the volume of data on the internet is gigantic and is increasing exponentially. Only extremely high performing networks live up to the task of ensuring stable connections and reliable data traffic in the future. It is therefore good that there is such thing as the technology group Heraeus, which manufactures high purity quartz glass in Saxony-Anhalt: the primary product for fibre glass.

It was in Bitterfeld in 1991 that Heraeus laid the foundation stone for a company that opened its factory gates for the first time in 1992. The company, which is based in Hanau, was then seen as one of the pioneers which faced up to the problems of an industrial region affected by environmental problems, companies stricken by insolvency, and an old fashioned infrastructure. Since beginning mass production of hollow cylinders from synthetic quartz glass, Heraeus has produced 18,000 tonnes of glass at the location and developed into one of the region's biggest employers. Today the firm employs around 400 staff here on a site that extends over 400,000 square metres.

Buyers of the plant's products can draw up to 7,000 kilometres of fibre optics through each of the three meter long, 200 kilogram hollow cylinders, without having to change the pre-form, explains Site Manager Christian Nasarow. So far, this means that Bitterfeld quartz glass is responsible for over 500 million kilometres of fibre optics in the world of telecommunications. "This corresponds with nearly three and a half times the distance from the earth to the sun." Or to put in other terms, these fibres could be wound around the equator more than 12,000 times. And every second they are joined by 3 new kilometres of fibres.

The synthetic quartz glass produced by the Bitterfeld company forms the protective cover for the optical fibres. 95 per cent of the gossamer fibre glass strands are made from this material. Their core, which subsequently conducts the light signal, must firstly be inserted in the hollow cylinders by the manufacturers. It fuses at around 2,000 degrees during the drawing of the fibre with the glass-body. This results in fibre optics with a draw speed of up to 120 km/h with a diameter of one tenth of a millimetre. This is equivalent to roughly double that of a hair.

It is therefore small, but also effective: it is possible to send several terabytes of data in each fibre per second. This means thousands of connections theoretically have an extremely quick internet connection. A single cable also contains up to 1,000 of these fibre optics. Since these cables do not bend well, however, for many years it was not possible for them to be fitted at end customers. Since they are generally subject to mechanical stress: who hasn't tripped over a network cable either at home or in the office? That's why the cables used by the end customer are almost exclusively made from copper which is then connected to the fibre optics network outside their homes or businesses. Yet 'Fibre to the home' (FTTH) is and remains the goal of the telecommunications sector – especially since the demand for transmission capacity is increasing hugely due to cloud computing and video on demand.

In this area, the experts from Bitterfeld have benefited from the Heraeus company strategy of continuously optimising its own products. In 2010 they developed a bend-insensitive fibre which could be produced on the basis of efficient mass production rather than on a small scale and expensive basis. In this way Heraeus finally realised its technological advantage. The group now sees itself as being the biggest producer of synthetic quartz glass in the world, manufacturing at 22 different locations in Europe, the USA and Asia. Christian Nasarow tells us that the material is used in a quarter of all the fibre optics manufactured world-wide.
The 50 year old says he is "very satisfied" with the Bitterfeld-Wolfen chemical park as a location. He praises the guidance provided by the authorities, the optimum transport links and the good expansion opportunities available for production and administration. And one man's pain is another man's pleasure. "The recent downturn in the solar industry in Saxony-Anhalt means many highly qualified employees are currently available in the region surrounding Heraeus." In specific terms, this recently saw two trainees who were in the third year at now insolvent solar cells manufacturer Sovello moving to Heraeus.

The manufacturer of quartz glass has every reason to look to the future with optimism – on condition that Germany will continue to focus on developing high speed networks via fibre optics instead of conventional copper cables. According to a study by the Fibre-to-the-home-Council, a European lobbying organisation, less than one per cent of all broadband internet users in Germany have a direct fibre optic connection to the internet. The study demonstrated that the Japanese, Norwegians and South Koreans all fare much better.

Heraeus Bitterfeld is equipped for the future: Thanks to an extension in the capacity of its plant II, in its 21st year of business the company is keeping pace with the growing challenges of the market.