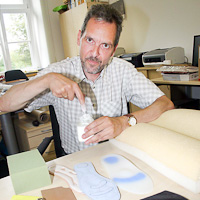 Dr Peter Gerth, scientist at the centre of excellence for engineering and renewable resources, the KAT-Kompetenzzentrum für Ingenieurwissenschaften/Nachwachsende Rohstoffe, at Magdeburg-Stendal University of Applied Sciences, has his suitcase ready for a trip to India. He has been invited to a conference run by the Indian diabetes association. He will be taking the opportunity to meet up with partners in the EU research project "DiabSmart".

In an international knowledge exchange, partners from industry are working with research institutions on innovative footwear for diabetics with a "smart" sole. The materials researchers from Magdeburg are contributing the skills and expertise they have already demonstrated in the development of a sports shoe for a major company.

"I have prepared a little experiment", says Dr Peter Gerth, pushing a beaker into the middle of the table and dipping his finger into the white liquid it contains – repeatedly and in quick succession. When he removes his finger, the viscous mass forms a long white droplet. Gerth explains that this is a non-Newtonian liquid. In other words, the liquid does not react like water, which - as Isaac Newton recorded - maintains a constant viscosity at a constant temperature.

A liquid whose viscosity changes with pressure could offer useful cushioning properties for a "smart" sole, such as that to be developed as part of the EU research project "DiabSmart" for a special shoe for diabetics.

Why do diabetics need a special shoe, and why does a special shoe need a smart sole?
Fortunately for him, says Peter Gerth, he is not familiar with the symptoms of diabetes from personal experience. India, however, where he has just been, has the highest number of cases of the disease in the world; the global figure is currently 250 million. Germany currently has eleven million diabetics and the forecasts are for this figure to rise. To highlight the serious effects of the disease, Gerth cites statistics from the International Diabetes Federation (IDF), according to which 85 percent of all foot and leg amputations are as a result of diabetes. "Half of these cases could be avoided with the right footwear", he says.

Gerth lays out a range of materials as visual aids. He finds a "hands-on" approach - "grasping" in the literal sense of the word - important in research. "You do not always immediately understand from the theory where certain material properties come from", says the practical-minded scientist from the KAT competence centre at Magdeburg-Stendal University of Applied Sciences. KAT stands for competent, applied and transfer-oriented research.

Conventional footwear for diabetics is padded with standard foam. Peter Gerth reaches for the "sponge". Its disadvantage: it provides the foot with a soft surface, but no support, unless it is stabilised with an extra insole. "What is more, you see fatigue in the foam after a while", explains Gerth, "but the diabetic wearer does not notice that his foot is no longer cushioned". Gerth goes on to detail one medical aspect which is also on the agenda for the conference in India. "After a while, diabetics begin to suffer damage to the peripheral nerves. Often, this disorder starts in the toes and spreads upwards in glove and stocking distribution. Pain and temperature sensation are severely affected and ultimately lost. Diabetics usually wear shoes that are too tight so that they can feel them at all", Dr Gerth notes, and explains that patients' feet can become deformed in the advanced stages of the disease because the damaged nerves can no longer sufficiently supply the tendons and muscles.

It is becoming clear why a shoe for diabetics needs an intelligent sole. The sole itself needs to recognise when and where there is increased pressure - in particular in the high-risk areas under the heel and the metatarsal. The smart sole must absorb this pressure. "Once a diabetic has developed cuts or sores, the body will not provide sufficient anti-inflammatory, wound-healing agents", explains Gerth.

Alongside the concept of a liquid-filled sole, where the cushioned effect is determined by flow properties, Gerth and his staff are also planning to research into other materials which have a strong damping effect and can reduce vibration.
"One possible candidate here is memory foam." He demonstrates how the foam firmly moulds to the shape of a body pressing against it, springing back to its original form when the pressure is removed.

"Ultimately, it will be a question of our partner in Spain developing a material which combines the positive properties of the various materials we have tested", says Peter Gerth. The Spanish company "Technofootbed" is established internationally as a foot bed manufacturer - and in this case, it is drawing on the test findings by the Magdeburg materials researchers and gait analyses by Staffordshire University in the UK, another close partner of Magdeburg-Stendal University of Applied Sciences. "We have already successfully collaborated on the development of the sports shoe", says Gerth.

At the end of the four-year project term, which will include a clinical trial, the concept for the complete diabetic's shoe is to be submitted. The scientist from Magdeburg is confident that the shoe's special form and materials will make a diabetic's walk though life a whole lot easier.