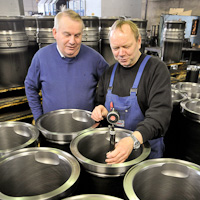 Deutsche Bahn diesel locomotives rarely pass by Blankenburg. That's not the fault of the Harzstadt train station. It is due to a traditional company, which manufactures cylinder liners for such vehicles in the industrial estate on the edge of town. The origins of Harzer Werke Motorentechnik GmbH date back to 1870. At that time, iron ore from the region was processed in one of the biggest grey cast iron foundries in Germany. Today the specialists supply highly refined results. Cylinder liners are used in ship engines and stationary machines, amongst other things, to generate power.

Managing director Björn Wittkowski seems to be happy with the company's current order situation. He says that the company didn't fare as badly in the crisis years as other companies. As a result of a cutback in the new construction of ships in the years 2009 and 2010, there was an increased requirement for repairs and maintenance on existing fleets. "We benefited from that," says the managing director. A recovery in the construction of gas motors in the field of renewable energies as well as the placement of diesel locomotive engines provide orders. "Business is therefore going well for us at the moment," is the concise and objective evaluation.

For the last ten years the Wittkowski family have been managing Harzer Werke Motorentechnik GmbH. The managing partner, Ulrich Wittowski, bought the cylinder production division from the insolvent Neue Harzer Werke GmbH. The former state-owned company found it difficult to stay on course in a market economy. The complete reorientation of the company and the separation of the former leading division of radiators and boilers led to the breakthrough. Liners used to be a niche product. As a Schwermaschinenbaukombinat Karl Liebknecht (SKL)company, the Blankenburg company supplies these for the East German HGV W50, which was previously not only in demand on the domestic market but was also a best-seller in the GDR export business.

Cylinder liners with an inside diameter of 120 to 480 millimetres are manufactured today. These weigh between 8 kilogrammes and 1.2 tonnes. For customers the Harzer Werke is also a partner for the determination of important parameters and characteristics of the liners. The company collaborates with the Scientific-Technical Centre for Engine and Machine Research in Roßlau in this respect.

All production steps, from the casting of the blanks to the final workmanship on the liners, are done in the Blankenburg company. Lots of work must be done by hand so that small- and large-scale production is done to the highest quality. Each individual liner is checked several times during production. Almost 30 per cent of production costs are a result of this complete inspection system. "Imagine what would happen if a ship was to get into trouble at high sea as a result of an avoidable defect on a liner," explains the managing director. Last but not least, the high quality of the parts produced is reflected in certifications from renowned classification societies, such as Lloyd's Register, for example. A good half of all deliveries are exported straight away, to Singapore, Japan, North and South America and, of course, all over Europe, as well as to other places.

The company employs people from the region. "All excellent specialists," according to the managing director. As of this autumn there will be apprentices in the company again. In times where there is a lack of skilled personnel, people must do something about this themselves.

Over the past ten years, Harzer Werke has invested several million euros in buildings, technology and photovoltaic systems. So far these photovoltaic systems supply three per cent of all the electrical energy required in the foundry. This figure should rise to five per cent in the next two years in the context of new investments. Following a large-scale demolition of old production buildings, further investments will be made in the construction of a modern production hall, amongst other things.