IT solutions for vehicles here help to simplify the driving experience - whether it be in the vehicle itself, in traffic, or inside and outside cities. Saxony-Anhalt is developing solutions in the fields of networked vehicles and autonomous driving.

> back to main page new mobility in Saxony-Anhalt

Connectivity is a central keyword of the new mobility. Modern vehicles are normally equipped with internet access, or possess WLAN. This makes possible communication within the vehicle between the individual vehicle systems, and the communication of the vehicle with external systems. The data exchange makes it possible, for example, for the system to notify the driver if they exceed the mandatory speed limit. Or to warn of traffic jams or accidents that have just arisen, so that they can be circumvented. 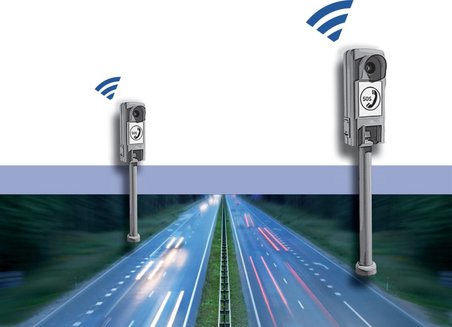 In the framework of the project ANIKA, which was realised in cooperation between the states of Saxony-Anhalt and Lower Saxony, there was a targeted study of upgrade options for the existing infrastructure system of autobahn call boxes. The object of the project was the sustainable and intelligent use of the existing infrastructure for the targeted conveying of up-to-date traffic information to road users in the respective area. It is planned to increase motorway safety by means of the communication possibilities arising between infrastructure and car (Car-2 Infrastructure).

The project has resulted in evidence of the feasibility of upgrading call boxes and the portrayal of useful fields of application and the basic working out of further fields of research. 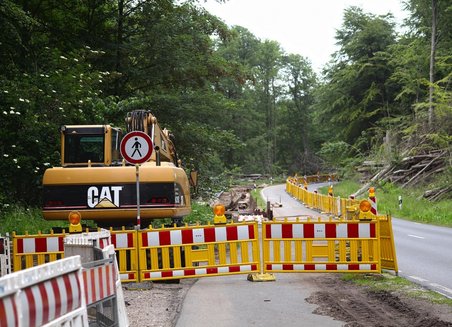 Germany-wide, unique system for warning of moving roadworks on autobahns

In Saxony-Anhalt, a Germany-wide and so far unique system for warning of moving roadworks on autobahns has been put into operation. “We want to use all possibilities leading to more safety on our roads”, said State Transport Minister Thomas Webel on the occasion of the commissioning of the new Workplace Warning System of Saxony-Anhalt (AWSA) in Dessau-Roßlau.

“The improvement of traffic safety and substantial reduction of the accident figures is one of our core concerns”, emphasised the minister. The objective of the state government, which is also anchored in the road safety concept, is called “Vision Zero”. “By 2020, we want to reduce the number of road fatalities by 40 percent and that of severely injured by 20 percent compared with the figures for 2010”, he added. Using the highway department’s own vehicles as warning indicators is a further step, he said.

According to the Minister, the existing information systems of the state traffic warning service and the broadcasting companies have been linked with those of the road construction authority. The warning message is broadcast via RDS/TMC (Radio Data System/Traffic Message Channel) to the car radios and navigation systems of all road users on the respective section of autobahn. The emergency vehicles and blocking trailers of the state road building authority signal where they are currently in use - whether it be for the securing of accident sites, for mowing work, or other maintenance measures along the autobahns. This way, drivers are informed in good time of disruptions in the flow of traffic, causing attentiveness to then be substantially higher in the actual danger area, said Webel.

“Here we make cheap use of already existing technology and business processes, thereby reaching almost all road users”, said the Minister, emphasising an important special feature of the new warning system. The messages can be received in the car or HGV as a graphic symbol and as lettering in various languages, combined with an acoustic signal. The system functions entirely irrespective of the terminal device. The idea for this was developed in the state-road building authority.

The system is to be used in future on all autobahns, A-roads, and land roads in Saxony-Anhalt. This is to cost around 150,000 euros.

Source: Ministry for Regional Development and Transport of the State of Saxony-Anhalt

A good book behind the steering wheel, while the car moves independently through the traffic? This kind of “autonomous vehicle for everyone” is certainly still a utopian idea. But many automated functions are already a reality in vehicles on our roads - from parking systems, to the automatic distress call function and lane assistant, to classic ABS. 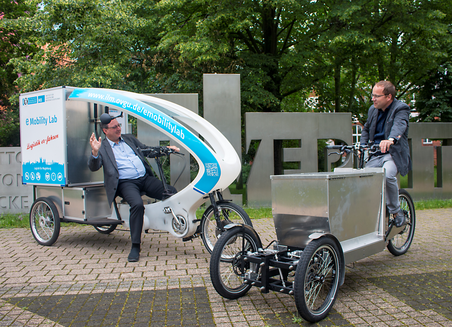 Passenger and Goods Transportation Gets a New Steer from Artificial Intelligence

Greater Magdeburg is a model region for innovative mobility concepts

Around 80 percent of Saxony-Anhalt’s population lives in rural areas. That calls for a lot of mobility. How do we reconcile this with efforts to reduce traffic volumes and harmful emissions? Researchers at Otto von Guericke University (OVGU) in Magdeburg are developing intelligent mobility concepts.

The small mediaeval town of Stolberg, with its half-timbered buildings, has held Historic European Town status since 1993 and is also a spa resort. Health and tourism must go hand in hand. But traffic volumes and CO2 levels are high on the narrow streets between over 380 restored half-timbered buildings. So the town became a partner in a long-term research project: researchers at Otto von Guericke University (OVGU) in Magdeburg are developing concepts for intelligent mobility. “In Stolberg we’re testing the use of an automated shuttle bus with an electric motor. It’s designed to take visitors from the parking lots on the edge of town to the historic center,” says Project Coordinator Hartmut Zadek, Professor of Logistics at OVGU’s Faculty of Mechanical Engineering. He emphasizes the term “automated”. The ultimate objective is an autonomous shuttle with a preprogrammed route, parts of which will not require a driver. But at the current stage of development a driver is essential while the artificial intelligence in the software is learning – just like a human brain. Zadek says that by using real-life driving experience, the developers are learning too – in terms of what works or doesn’t work – with a view to the longer-term vision of driverless shuttle buses. He highlights the technical possibilities as well as user acceptance, and of course legal regulations, which are not yet in place. Engineers, computer scientists, environmental psychologists, social scientists, logisticians and network experts are all contributing their expertise. The plan is to drive an automated shuttle bus through Stolberg by the middle of next year in 2021.

The minibus is being developed by EasyMile, an electric commercial vehicle manufacturer. The particular challenge with automated driving is real-time communication between road users as well as between the vehicles and the overall transportation infrastructure, says researcher Zadek. Interactive sensor technology is used to capture traffic data, for example about tailbacks and obstacles, and relay it to vehicles. “Traffic intersections such as junctions and roundabouts, but above all traffic light installations, have to be fitted with sensors and/or transmitters in order to send ongoing traffic data to automated vehicles,” says the professor, who goes on to explain that communication tests are currently under way along a traffic-light controlled route in Halle, in collaboration with the Magdeburg Institute for Automation and Communication (ifak).

In Stolberg, there are no traffic lights. So the next step will also be to run a shuttle bus in Magdeburg, the state capital, on a suitable pilot route. “Filtering back into the flowing traffic after stopping is a particular challenge for the technical systems,” says logistics expert Zadek. He mentions the development of a digital control center to monitor all of the automated systems, which would allow an operator to intervene if necessary. This control center would then be integrated in the control room of the owner – such as a passenger transportation company.

When it comes to energy efficiency, and to minimizing traffic volumes and CO2 levels, parcel delivery services are also under the spotlight. Zadek, who is managing the project, says that since consumer behavior will not change and online shopping is on the rise, the model region for intelligent mobility would, of course, take account of the need for sustainable parcel delivery. He is referring to a future urban hub run by project partner Biberpost, which bundles deliveries from different parcel services so that they can be driven to a micro-depot in a local district. The parcels are then collected by their addressees or delivered by electric cargo bikes. Magdeburg engineering company FIApro has expertise in prototype construction. It is developing and building the swap bodies for the e-cargo bikes that are loaded at the urban hub. Test operations at the first Magdeburg micro-depot with parcel bikes are due to start in mid-2021.

A helping hand for communities

Looking further into the future, the logistics professor predicts autonomous parcel delivery vehicles in Magdeburg. Once again, Otto von Guericke University is laying the groundwork. An interdisciplinary team led by Stephan Schmidt, professor for autonomous vehicles, is developing the riderless cargo bike – from the chassis, to the intelligent operating system, right through to the digital request service. The target group for this bike is people who for one reason or another decide not to have a car, says Schmidt, who knows from personal experience that “It suddenly makes purchases more difficult than you realized. You wish you had some kind of transport to help carry them.” His team’s vision: You use an app to request a cargo bike. It travels to you autonomously and, once loaded, you can ride it to your desired destination either by pedal-power or using an electric drive.

Initially, the cargo bikes will be ridden exclusively by safety companions and will learn how to navigate traffic by means of artificial intelligence. “We’re developing a safety policy that includes the legal classification of autonomous bikes,” says Schmidt. “The safety aspect is a priority in all our projects,” adds Zadek. He talks about a helping hand for communities in Saxony-Anhalt in terms of the needs and possible applications for autonomous passenger and goods transportation as well as special infrastructural requirements. Regional transport service Sachsen-Anhalt GmbH NASA is already a staunch supporter of these intelligent mobility initiatives.