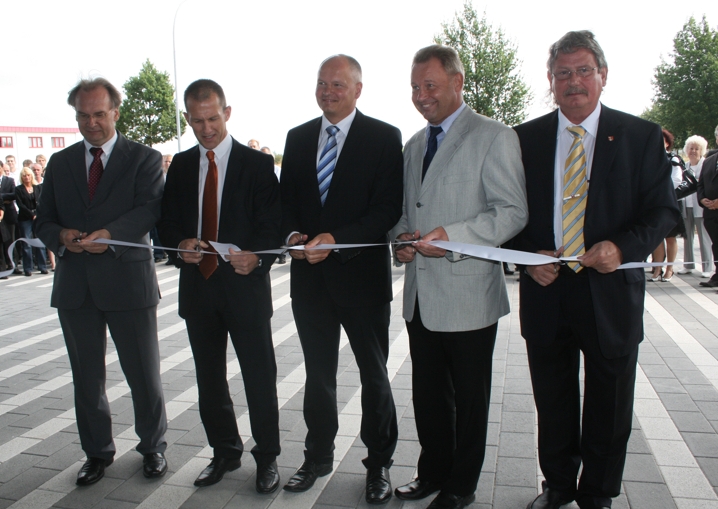 FuelCon's success has lead to its corporate expansion. About one year after laying the foundation stone FuelCon AG has formally opened on August 6th its new headquarters together with Dr. Reiner Haseloff, Minister of Employment and Economic Affairs of the Federal State of Saxony-Anhalt.

At 11 a.m. Mathias Bode and Dr. Ingo Benecke, Managing board of FuelCon AG,
welcomed the numerous guests and neighbours from industry and politics, followed by the opening speech of Dr. Haseloff who appreciated the company.s engagement and location decision for the new headquarters. With great applause of the guests and employees Mathias Bode, Dr. Ingo Benecke and the minister finally performed the traditional ribbon-cutting ceremony. The presentation of the production hall completed the formal opening and allowed the guests to get a first-hand impression of FuelCon's activities.

Already in 2007 the managing board of FuelCon decided to invest in their own company building located in the "Technologiepark Ostfalen" in Barleben near Magdeburg. After an intensive planning period, the symbolic ground-breaking ceremony on March 31st, 2009, initiated the construction of a new modern building in the Steinfeldstr. 1, just a few meter away from the old place. With a total investment of 5 Million Euros an extensive production hall, test centre, laboratory as well as meeting and office rooms were build on 3,200 square meters. The bright, classy architecture gives the headquarters a unique character.

„With the today's ceremony we open not only a new building but also establish new perspectives for a long-term company growth und the further successful development and supply of our products. underlines Mathias Bode. .Because we aim both, strengthening and expending our global leading position in the market.” “It was furthermore important for us to provide our customer as well as our employees with an adequate environment.” adds Dr. Ingo Benecke.

FuelCon is the global leading supplier of test and diagnostic systems for fuel cells, and batteries. For years, the FuelCon name is recognized for extraordinary product quality, high technical standard, dedication to costumer service and innovation. With its test station series "Evaluator-LT" and "Evaluator-HT" the company manufactures test rigs for all typical fuel cell technologies like PEM, DMFC, SOFC or MCFC in a power range between a few watts up to 150kW fuel cell performance. The "Evaluator-B" enables the fully automated testing of batteries, super capacitors and energy management systems.
Furthermore, FuelCon offers with the product lines TrueData and TrueXessory a various portfolio of diagnostic equipment and accessories. Aside its headquarters in Germany, FuelCon is with its subsidiary FuelCon Systems Inc. and several Representatives active in Europe, North America and Asia.