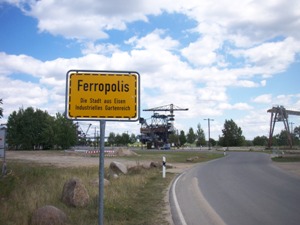 Visitors find Medusa, Mosquito, Mad Max, Gemini and the Big Wheel awe inspiring enough during the day. Like sleeping prehistoric giants, stretched out for up to 130 meters, these iron skeletons sit around the Ferropolis Arena, a modern amphitheatre with lake views. On some summer nights, however, these silent watchmen come to life. As 20,000 people take to the stands to enjoy live music from stars such as Metallica, Oasis, Pulp, Die Toten Hosen, Björk and Peter Maffay, the stage is illuminated by over 300 spotlights that are positioned on the five former mining excavators. In the orbiting laser projections, the giants seem to dance.

Approximately 80,000 kilowatt hours of electricity are consumer during the Melt! Festivals which have been taking place regularly since 1999 in the city of iron near Gräfenhainichen in the east of Saxony-Anhalt: three days of electronic and rock music. "It's true - we recklessly waste energy here," explains Director of Ferropolis, Thies Schröder - but he doesn't have a bad conscience about it. This is because ever since last year the industrial monument - which is situated on a mining headland that still contains brown coal - has been collecting solar energy with approximately 2,000 thin film solar modules positioned over four roofs, with a total output of 210 kilowatt-peak. Schröder has worked out that the 170,000 kilowatt hours of energy produced each year are enough to power two festivals.

At the moment, however, the solar generated electricity goes straight into the local power grid. A solution should be available for the storage problem by 2014 at the latest, however: The goal of supplying a complete stage, perhaps followed by the entire festival site with their own electricity, which would be on tap from their own solar accumulator, is called 'Sunplugged'. In a 'temporary city' of this kind, however, this is a far more difficult technological challenge than it is in a residential area of terraced homes that has a relatively reliable load curve, explains Schröder. He and his team have now won over partners from industry for their idea.

Yet Sunplugged is just the start of a 'walk-in energy revolution' in the former mining area. Why is this popular tourism and festival location, counting more than a million visitors since 1995 and location of 'Splash', the biggest hip-hop festival in Germany, and the legendary Melt! Festival, so interested in this topic? The qualified Landscape Architect, who once developed a local NABU (German Nature and Biodiversity Conservation Union) group in his home town of Schenefeld in Schleswig-Holstein, points to the scenery and the excavators before him: "Brown coal is actually just a compressed form of solar energy. You have to remember that the production and use of electricity on a large industrial scale still took place far less than a hundred years ago" explains the 47 year old.

The fossil fuel from the mines in the East of Saxony-Anhalt was mined for nearly three decades solid. When the pits were flooded after the sites closed in 1991, five large scale mining excavators were 'laid to rest' on the shoreline. Rusting witnesses to the machine age, they are the impressive foundation buildings of the iron city of Ferropolis.

In those days nuclear power stations were still widely regarded as being the clean alternative to fossil fuels. Nowadays the future is in renewable energies. The solar panels at Ferropolis were manufactured just a few kilometres away, at the now insolvent Q-Cells, once the world market leader. "Setbacks are part of business life" shrugs Schröder. For this reason, Ferropolis "should take up the story. We want to show how the energy revolution can continue with new technologies and that this is a permanent process of optimisation." And it is for this reason the city or iron wants to be more than simply an open air museum and festival site.

The scientists and business owners who visited two 'future workshops' in Ferropolis were also enthused by this idea. The special aura of the location provided considerable impetus to think about experimental models. For instance, an offshore wind-turbine in the lake, via stunt kites as a 'flying power station', or a seabed accumulator which uses pressurized air to produce energy. Or connecting photovoltaics and drive technology for a rail link to the Ferropolis - the rail tracks used by the miners are still intact. "We might not be professional engineers but we are asking the right questions and building as many partnerships as we can" explains the Manager. In this context, the Ferropolis team is currently looking for partnerships in local schools. A lab for school students has been set up in the former 30 KV substation which once supplied electricity to the mines. Here, the coming generation can experiment with energy technology and use a solar construction kit, for instance.

Thies Schröder's vision: "In ten years' time Ferropolis will produce so much excess renewable energy we can also waste some of it with a good conscience." A solar powered ice skating rink is a possibility - with renewable electricity cooling the rink in the summer. "We are still in the early days of energy technologies" says the Director once again. But right now the most important task is to make sure the spotlights on the old excavators don't go dim when the music gets loud.