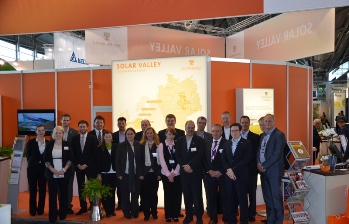 Magdeburg/Frankfurt a.M. With eleven exhibitors, SOLAR VALLEY Saxony- Anhalt will present itself at this year's European Photovoltaic Solar Energy Conference and Exhibition in Frankfurt am Main, which will open its doors from 25 to 28 September.

The trade fair appearance of the state of Saxony-Anhalt, which will be organised under the umbrella of the Investment and Marketing Company (the economic development agency of the German federal state Saxony-Anhalt - IMG), has the focus of "creating synergies, and strengthening research and innovation", this year.

"Especially in the current difficult situation, the trade fair provides a good opportunity for Saxony-Anhalt solar companies to open up new sales markets, and make contacts", emphasises Minister for Science and Economic Affairs Prof. Dr Birgitta Wolff. "Regardless of this, it is important for the sector to focus more on research and development, and user-oriented products, in the future. This includes any decentralised solutions, which link the various regenerative energy sources, storage technologies and intelligent control technology."

"As economic promotion of the state, we are offering the local solar companies an additional sales channel, in trade fair appearances such as at the PVSEC. Trade fair appearances are still one of the best marketing instruments for products that require explanation, and the most efficient form of personal contact with partners and customers", explains IMG manager Dr Carlhans Uhle.

In hall 3.1 stand D14, eleven exhibitors will use the communal stand of IMG Saxony-Anhalt as a platform, to present their locations, innovative products and competences along the whole added value chain of the photovoltaics industry.

EUROGLAS GmbH from Haldensleben will be using the trade fair to introduce its most recent product innovation EUROWHITE into the market. The highly transparent white glass EUROWHITE achieves 92% light and 90% energy transmission, thanks to its highly reduced iron oxide content, with glass thicknesses up to 6 millimetres. This gives an accumulated total energy admission of 91% - and the highest efficiency for photovoltaic applications.

The insolvent Sovello GmbH from Bitterfeld-Wolfen, whose production has been stopped since the end of August, until further notice, will use the trade fair environment for further discussions with investors.

An overview of the exhibitors on the communal stand:

In terms of climate change policy, Saxony-Anhalt has done its homework: In terms of renewable energies, the Federal State has developed into a prime example for green technologies. In 2011, renewable energies already constituted 44% of the net energy generated. Therefore, Saxony-Anhalt is in the top tier in a Germany-wide comparison. The national average is around a fifth.

Photovoltaics contributes around 4% to energy generation from renewable energies. In 2011 alone, 3,809 new panels with a total output of 448 MWp were installed in Saxony-Anhalt. The average size of the panels is 1187.6 kWp, second place in the national average. Overall, currently around 14,550 photovoltaic panels are generating energy from the sun, with an installed output of around 869 MWp.

At the beginning of 2012, a 28 megawatt solar power station from GERO Solarpark GmbH started operation in Amsdorf near Halle. The modern power station, a €50 million investment, provided solar energy just seven weeks after the ground breaking ceremony. The client is GERO Solarpark GmbH, whose shareholders GETEC green energy and ROMONTA planned and developed the project together, and implemented it with Q-Cells as the system integrator. Therefore, the majority of the investment sum remained in Saxony-Anhalt. The annually electricity usage of around 9,000 households can be covered by the new plant.

In light of the current crisis of the PV sector, Saxony-Anhalt faces great challenges in terms of industrial policy. The state supports the affected companies in SOLAR VALLEY as far as possible, to create new prospects in spite of the large international competition and the dumping prices. Thereby, the focus is on strengthening local research and development, so that new chances arise from the crisis. The Fraunhofer Centre for Silicon Photovoltaics CSP plays an important role in this.

About the EU PVSEC

The EU PVSEC - European Photovoltaic Solar Energy Conference and Exhibition - is an international specialist congress for research and development, industry and use in the area of photovoltaics as well as a leading PV industrial trade fair. It is one of the most important photovoltaic events worldwide, and is seen as the most significant platform for Science-to-Science, Business-to-Business and Science-to-Industry. Around 300 specialist lectures, more than 1,000 poster contributions, several workshops and specialist forums, as well as specific PV industrial forums will be offered in the course of the EU PVSEC.