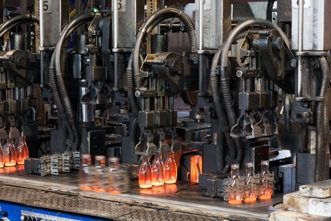 The most modern European container glass factory, HNG Global GmbH in Gardelegen, wants to substantially expand its capacities in the next two years. The high-quality raw materials come from Saxony-Anhalt and ensure a particularly fine quality of white glass bottles. For the Indian owners it is the first corporate location in Europe.

The “hot end” is the loud start on the route of glass production. The machines vibrate with an A-weighting (dB (A)) of 100 decibels and make ear plugs obligatory. “Compared with older glass factories it is quiet here”, assures Jens Sürig, production manager at glass container manufacturer HNG Global in Gardelegen. The 30-metre long melting end – the start of glass production called “hot end” in the industry jargon – is about five metres high above the floor of the factory hall. Gas burners fire the mixture of quartz sand, soda, lime and scrap glass shards until it is melted at 1,450 degrees Celsius. This entails 330 tonnes a day. Red-hot glass drops, cut and exactly proportioned, fall from the drop ring and dance in consistently rapid succession – similar to ghost lights – down to the three machines. There the glass is brought into definitive form. The tell-tale orange-glowing bottle base still signalises a temperature of up to 600 degrees.

The bottles cover a distance of nearly 60 metres on the automatic flow length towards the “cold end”. At the same time they are cooled down. A person only intervenes again at the end, during the quality control. The “carpet of bottles” is now 60 to 80 degrees when the employees protected with special gloves check the bottles for the most varying quality features. Their critical eyes follow a control sequence with camera and laser technique which is unrivalled in the container glass industry.

About 300 bottles of white glass glide every minute across conveyor belts of the individual machines. About 900,000 to 1.3 million items – in 55 different shapes and sizes, including small pharmacy bottles, glass ketchup bottles and vodka bottles – are produced daily at the “Ost II” industrial park in the small town in the Altmark region. The distilled beverage industry fills most of the bottles. “The industry is primarily based in the northern half of Germany, and we are right in the midst of the action there”, says Wolfram Seidensticker, technical managing director at HNG Global. For instance, Nordhäuser Doppelkorn (double-distilled schnapps) and various vodka bottlers are major customers. But sparkling wine manufacturer Rotkäppchen and smaller wineries as well as breweries, juice manufacturers and the soft drinks industry are also among the customers. Almost everything that can be drunk and does not end up in a tetra-pack or a PET bottle fits into the bottles from Gardelegen. About 80% of the bottles are manufactured according to the design requests of respective customers. And after distilled beverages there is now also a trend with beer towards individual design, says sales manager Eric Heinemann knowingly. The Rhinelander comes from the glass industry and has sought new challenges, just like Sürig, his production colleague from Lower Saxony.

The most modern container glass factory in Europe was the first new construction of a glass factory on the continent after more than two decades as it started under the name Agenda Glas AG in 2010. After a bumpy start-up with insolvency in the meantime, the listed Indian family-run enterprise owned by the Somany family, Hindusthan National Glass & Industries LTD (HNGIL), took over the factory with all employees in 2011. HNGIL with headquarters in Kolkata has a 68% share of the market in India and owns eleven production sites there. The company was founded in 1964 by C. K. Somany. Today he is supported by his sons Sanjay Somany (CEO) and Mukul Somany (COF). In addition to the activities in the hollow glass sector, trading companies and float glass factories are among the corporate group’s mainstays. The involvement in Germany is the first outside of the own country.

The Gardelegen location was not only saved, but even expanded with immediately following investments. Capacities shall be substantially expanded in the new two years. In addition to the 65 million euros invested in the foundation of the company, managing director Seidensticker speaks of another roughly 40 to 45 million euros in investments. Plans include the construction of a second melting end. The annual production quantity shall be increased by then from about 100,000 tonnes (300 million bottles) now to about 143, 000 tonnes. Well over four million tonnes of new container glass are annually required in Germany. HNG also sees an increasing demand from abroad. A maximum of 10% has been exported up to now, mainly to The Netherlands and Scandinavia.

Seidensticker justifies his optimism for the future of the location with the high quality of white glass from Gardelegen: “It is hardly distinguishable from drinking glass quality.” The quality of raw materials ensures the crystal effect that is as clear as glass, unadulterated and without any “green cast”. They come from Saxony-Anhalt: low-iron sands with 99.5% proportion of quartz from Uhry and Weferlingen, soda from factors in Staßfurt and Bernburg as well as lime from the Harz region. In the meantime, the Gardelegen glass manufacturers replace 45% of the primary raw materials through treated shards from bottlers and recycling enterprises in an effort to protect the environment and save energy.